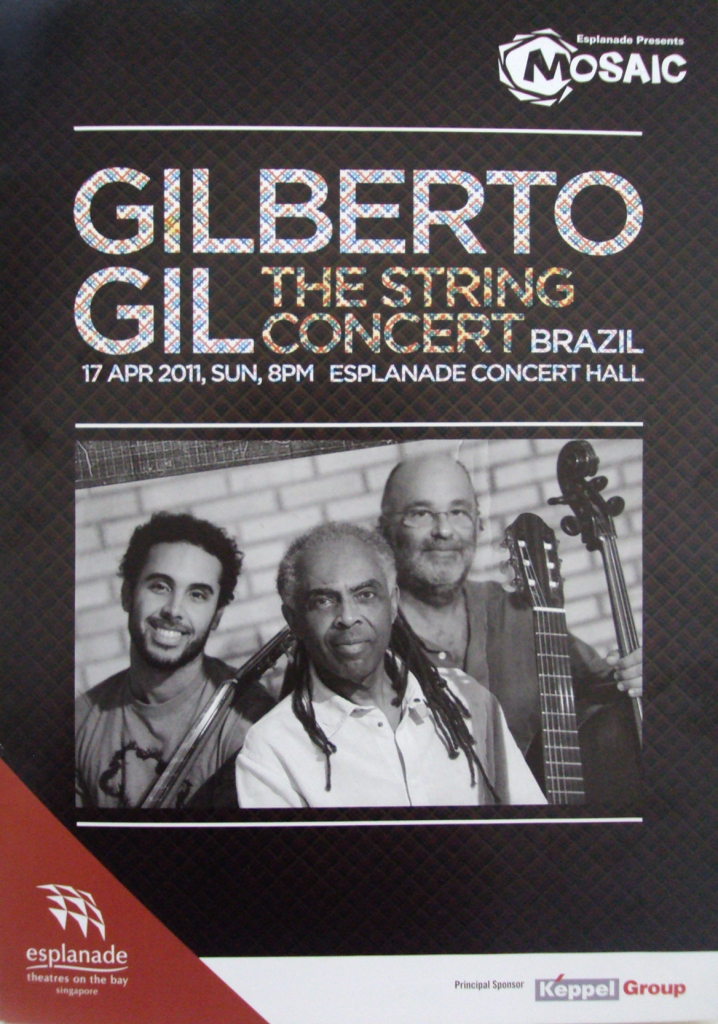 Last Sunday, I watched the string concert of Gilberto Gil, a world-renowned Brazilian singer, composer and musician, and a seven time Grammy winner. The performance was held in the Esplanade Concert Hall in Singapore, and it was Gilberto’s second time to play there–the previous one being seven years ago in 2004.

I had been invited to the event on the day itself, by a woman who I had met in a Third-Culture Kids meet-up in Singapore. I had been stunned at the suddenness of the invitation, but was eager to join. Though I had been inside the Esplanade, I had never seen an actual performance within it.

How can I fully describe it? When I entered, the Concert Hall was almost full, with the crowd composed of both local Singaporeans and foreigners. As the light dimmed, Gilberto Gil entered the stage alone. He sat with his guitar and sang a solo song in Portuguese in a distinct, velvet voice as rich as brandy. Afterwards, he introduced his son, Bem, who touchingly kissed the top of his father’s head before sitting down himself, and the immensely talented cellist Jaques Morelenbaum.

The concert itself was one and a half hours long, but the pacing was perfect. The array of Brazilian-Portuguese songs were sometimes soothing, sometimes energetic–but always, always soulful. His style incorporated many elements, like jazz, particularly samba and bossa nova, as well as reggae and funk. When he played “Babá Alapalá” and “Andar com Fé,” he got the crowd to join in with him in singing. Some fans in the orchestra seats whooped and waved a Brazilian flag.

Though music is already often intimate, Gilberto Gil, in spite of being in front of a crowd of hundreds, made it even more so. He connected with us by talking about his family (he has 7 children) and by devoting two songs to them. He told us in halting, careful English, how we wrote an ode for his wife, “Flora” and about how he created a song for his daughter, Maria, for her wedding day.

In his song, “Metáfora,” Gilberto Gil sang about how important metaphors are to the poets that use them in expressing deep, complex things in a simple manner. It is clear that in his concert on April 17, 2011 in Singapore, Gilberto Gil used his music to do the same.

An eight-year old girl tiptoes downstairs at night time, wanting a glass of water. To her surprise, a warm yellow light is on in her living room. She hears soft, sensual music gently playing. She does not understand the words.

She peeks in, and her father, a man usually intensely focused on his work, is sitting on the couch alone. His eyes are closed and a small smile plays at the corner of his mouth. A half-full glass of brandy is curled in his hand. The notes sway in the summer air.

She thinks that her father is not in the room with her. He must be elsewhere; perhaps, in a place with waves–his toes buried in powdery sand. She creeps back upstairs without disturbing him, the soft, golden fingers of the music wrapping itself around her memory.

This is her first time to hear Brazilian music.

Where my feet took me

Among the many things I am, I would say that I’m a traveler. I’ve lived in 8 different countries so far, and I've visited plenty more.

Six months after I was born, I left my home country of the Philippines and my family and I flew off to Nigeria. From then on, my childhood was one full of transition: aside from my passport country and Nigeria, I was able to live in Guam (USA), India, and South Africa before I was even 10 years old.

I returned to the Philippines to complete my education, but even then I still longed for flight – I participated in an exchange program in France for a semester while I was completing my bachelor’s degree in the management of communications technology. After graduation, I took a marketing internship in the Czech Republic for half a year. I spent two years in Singapore working for a great company, and then they moved me to San Francisco, where I live now!

Though many aspects of my life have not been constant, several things have remained true: my devotion to my family, my passion for travel, and my love for the written and spoken word.

“All journeys have secret destinations of which the traveler is unaware.” - Martin Buber